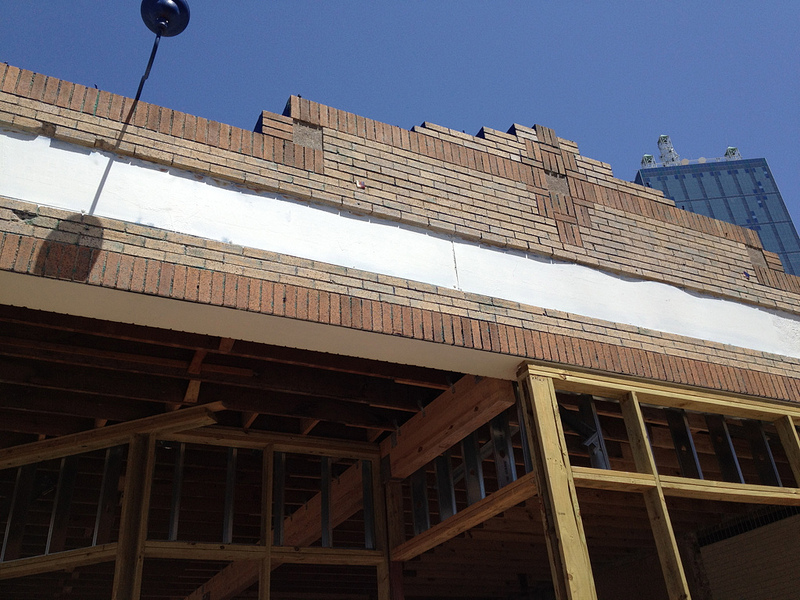 2012 was a busy year for historic preservation wins and losses in the City of Dallas.  As downtown continues to draw new businesses, cultural institutions, parks and residents, it remains an area of constant change. Some long-time landmarks were inevitably demolished, while plans continue to breathe life back into others. New publicity to the neighborhood is also bringing about a sense of awareness, helping residents understand the history and heritage behind the city’s landmarks. Several high-profile restoration and renovation projects will continue to evolve, but today we take a moment to look back on top stories from 2012 (in no particular order).

The West End Historic District, long an entertainment center in the heart of downtown, saw renewed interest from developers after several years of stagnation. Antioch Church purchased and made plans to renovate and occupy the long-vacant Awalt Furniture Building, while Fairfield Residential announced a large residential project on the site of the demolished Katy Depot. Work also began for the next phase of restoration at Dealey Plaza, which will host the JFK assassination 50th anniversary tribute in late 2013. A walk through the district reveals new businesses in new and renovated buildings as the area evolves into a mixed-use district.

First Presbyterian Church’s plans to transform the historic Warner Brothers Film Exchange / 508 Park Avenue building became real with a ceremonial groundbreaking in November. Throughout the year plans were refined and community events kept the project fresh in the minds of supporters. Crowds gathered in April to watch the demolition of the Columbia Pictures building, site of a future outdoor amphitheater (which will incorporate some rescued elements from the building). A vacant lot at the other end of the block is planned to become a large community garden. The surviving 3-story Art Deco landmark will go through a detailed restoration and reopen as a multi-use facility and outreach of The Stewpot.

In June a group of Dallas professionals gathered together to research and promote the hidden history of Downtown Dallas. Calling themselves the “Urban Armadillos,” the volunteers gathered pop culture and historical tidbits to create a walking trail of landmarks in the heart of the city… even in areas where today’s skyline does not resemble the past. As Dallas continues to draw more people to a revitalized downtown, the group’s efforts will reveal interesting stories to both locals and visitors alike.

4. Guests check in to a coffin factory at the NYLO Hotel

A 101-year old coffin factory in the Cedars neighborhood reopened in mid-August as a neighborhood boutique hotel. Developer Matthews Southwest opened the 76-room NYLO hotel after an exterior restoration and interior renovation of the red brick Dallas Coffin Company building. The eco-friendly renovation showcases the building’s industrial past with exposed ceilings, concrete floors and exposed brick. Vacant for several years, the new building adds another element in the trendy Southside on Lamar development; the creative conversion also offers a rooftop bar with excellent skyline views.

Historic Preservation Officer and author Mark Doty showcased many of the city’s demolished structures in his new book Lost Dallas, which hit shelves in late Spring. The book features 200 photographs of important structures in the city’s history that have been lost to progress (and in some cases, ill-advised speculation). The Dallas Center for Architecture organized an exhibit and walking tours related to the book’s content, giving long-time residents a chance to share their memories and educating other residents about the city’s architectural heritage.

The 15-story Praetorian Building — once the tallest in the city but later altered beyond recognition — was part of a  large purchase of historic buildings by Headington Oil as part of the major expansion of the Joule Hotel. While the hotel restored the Sumpter Building and smaller structures on Commerce Street (adjacent to the current hotel), buildings across Main Street suffered a different fate. The debilitated Praetorian Building began a long process of mechanical demolition after concerns about implosion surfaced. Smaller buildings facing Elm Street (and adjacent to Stone Street) also came down as part of the project. While there are no immediate plans for the soon-to-be-vacant parcel of land, the multimillion dollar hotel expansion across the street will feature 31 new rooms, a spa, meeting space and restored mosaics from the nearby Mercantile Bank Building.

The landmark U.S. Post Office and Courthouse Building located 400 North Ervay celebrated its grand re-opening in August after a successful conversion to 78 residential units. The long-vacant federal building was meticulously restored: the upper floors were converted to apartments while the ground floor remains an active post office. After the apartment units opened in late 2011 developer Shawn Todd continued work on public areas of the building, converting abandoned spaces on the ground floor into executive office suites with plans for an additional small retail storefront. The historic federal courtroom on the third floor and beautiful rooftop deck have become popular venues for parties, weddings and special events.

The University of North Texas caused quite a stir when they announced plans to alter the facade of the 1955 Titche-Goettinger Building annex. The large windowless building — formerly part of the Titche-Goettinger Department Store — featured a limestone facade and large cartouche, symbol of the company. Despite its location in a historic district, the university received state-level support to modernize the building with rows of windows for new classrooms in the renovated building. It was claimed that the cartouche — the main decorative element of the facade clearly seen from Main Street Garden — would not be compatible with the changes. After concerns about its safe removal, the 55-piece mammoth cartouche was removed in November and hauled to the city’s boneyard for preservation.

An October decision by the owners of the 88-year-old Thomas Building caught many people off-guard when the building’s impending demolition was announced. Despite having escaped the wrecking ball in 2004 and remaining the last link to the city’s cotton history, the building had no historic designation preventing its demolition (even though owners made a verbal agreement to preserve it). Within a month of the announcement and after pleas from preservationists, the structure was demolished in an impressive implosion that reduced the building to rubble in 12 seconds. Even worse: the building came down for an expanded parking lot, with no plans for future development on the site.

The Statler Hilton renovation continued in 2012 and reached a high point when a dozen blue lights were switched on to illuminate the Mid-Century building; in October crowds gathered for the event celebrating a milestone in the building’s long renovation. The cool blue lights dramatically showcase the building’s cleaned glass and porcelain enamel facade to visitors at Main Street Garden. Inside, work continued on the hotel renovation: a Jack Lubin mural was discovered hidden behind a wall, and a mockup apartment was developed to show investors the potential for residential conversion.