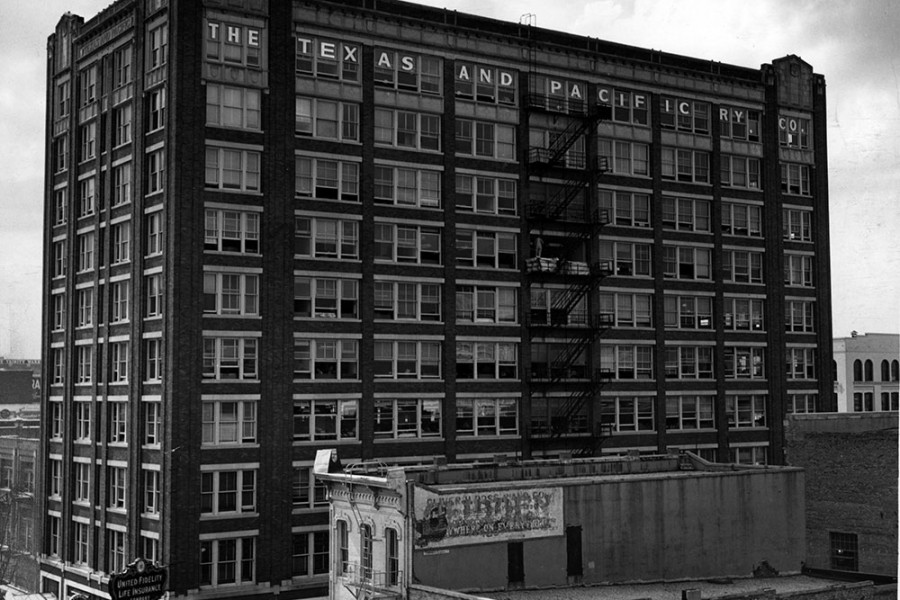 Most people walking past 1025 Elm Street would never guess the building turned 100 years old in 2013. Behind a modern facade remains an interesting building that transformed with the growing city around it. The former businesses and occupants played an integral role in helping shape the modern city of Dallas.

A pivotal moment in Dallas history can be traced to 1873, when a junction of two major rail lines less than one mile east of this location connected the north-south Houston & Texas Central Railway with the east-west Texas & Pacific Railway. One of the first rail crossings in Texas, this new strategic advantage established the city as a rail destination and the center for commerce in the Southwest. The Texas & Pacific Railway — operating under a federal charter to construct a southern transcontinental railroad after the Civil War — began in Marshall, Texas, and moved westward. One year earlier, the Houston & Texas Central Railway arrived from Corsicana in 1872, bringing with it entrepreneurs and businessmen looking for new markets.

Businessman Joseph Huey and his younger associate Simon Philp had followed the railroad north, moving their hardware store every six months and growing their business. Once in Dallas, they established Huey & Philp Hardware Store on Elm Street in 1872, supplying the quickly growing city with iron, tin, barbed wire, cooking stoves and nails. Demand was so great that carpenters would line up along the sidewalk to buy their nails before working hours. The store also supplied new hotels with plates, pots and pans. As business grew, so did their stores: the third location was built on this site at Elm and Griffin Streets in 1881, but in 1912 a fire destroyed the store along with the entire stock of merchandise.

After the devastating 1912 fire, Griffin Street — long an important thoroughfare from the business district to the north side of town— was widened and a new “fireproof,” four-story concrete building (the basis of the present structure) rose on the site in 1913. The handsome brick and stone structure, designed by noted architects Lang & Witchell, became the new home for Huey & Philp, and was the largest building in Texas dedicated to the retail hardware business. The progressive retailer became a national model for other businesses of its kind. Tools and fixtures were artistically displayed in specially designed cases on the large ground floor, surrounded by balconies reaching higher shelves of surplus stock. Unlike other stores of the day, merchandise was not displayed higher or lower than could be seen by the customer, resulting in a well-organized, attractive shopping experience. The second floor contained appliances, hotel supplies, housewares and a women’s lounge (complete with telephones); the third floor showcased builders’ hardware and sample rooms; and the fourth floor displayed dairy and ice cream supply equipment.

Designed with expansion in mind, six floors were added to the top of the building in 1918. The Texas & Pacific Railway relocated their general offices to eight of the building’s 10 floors (the railway’s previous offices were across Pacific Avenue, a street named for the railway that also contained its main tracks until 1923). Several hundred railroad executives and clerks were employed in the offices. By 1931 the Texas & Pacific owned 365 locomotives, 236 passenger cars and 9,816 freight cars earning $24 million in freight revenue and over $3 million in passenger revenue.

The building passed into the ownership of United Fidelity Life Insurance Company, an insurance company established in Dallas in 1920. The growing company opened offices on the third floor alongside Huey & Philp and Texas & Pacific. Huey & Philp closed their venerable store in 1934 to focus on growing their wholesale trade. The company’s large warehouses in the West End supplied hotels and other clients across the country for many decades.

The former retail space was remodeled and used as offices; the building received updates and air conditioning in 1949 but didn’t change much in appearance. In 1959 — after calling the building home for 41 years — Texas & Pacific Railway relocated to a modern building a few blocks away. In an effort to modernize the building and expand the firm’s home office, United Fidelity Life removed the decorative brick and stonework exterior and replaced it with beige aluminum and enamel. A city project relocated Griffin Street to the west of the building (the original street became a plaza named Griffin Place) and a large parking garage was added. United Fidelity Life remained the major occupant of the building until the firm’s departure from downtown in 1980. The building continued as general offices as larger and taller skyscrapers filled the neighborhood.

In 2013 the building received a complete renovation by Lowen Hospitality Group (as seen in photos below), and was reborn 100 years after its birth as Homewood Suites by Hilton. Today’s guest accommodations occupy historic spaces where innovative hardware showrooms, railway offices and financial rooms influenced the growth and success of Dallas.

Note: the above narrative was created for a display installed in the Homewood Suites lobby as part of the building’s renovation. Along with historic photographs (courtesy Dallas Historical Society and Dallas Public Library) artifacts from Huey & Philp and the Texas & Pacific Railway are on permanent display.