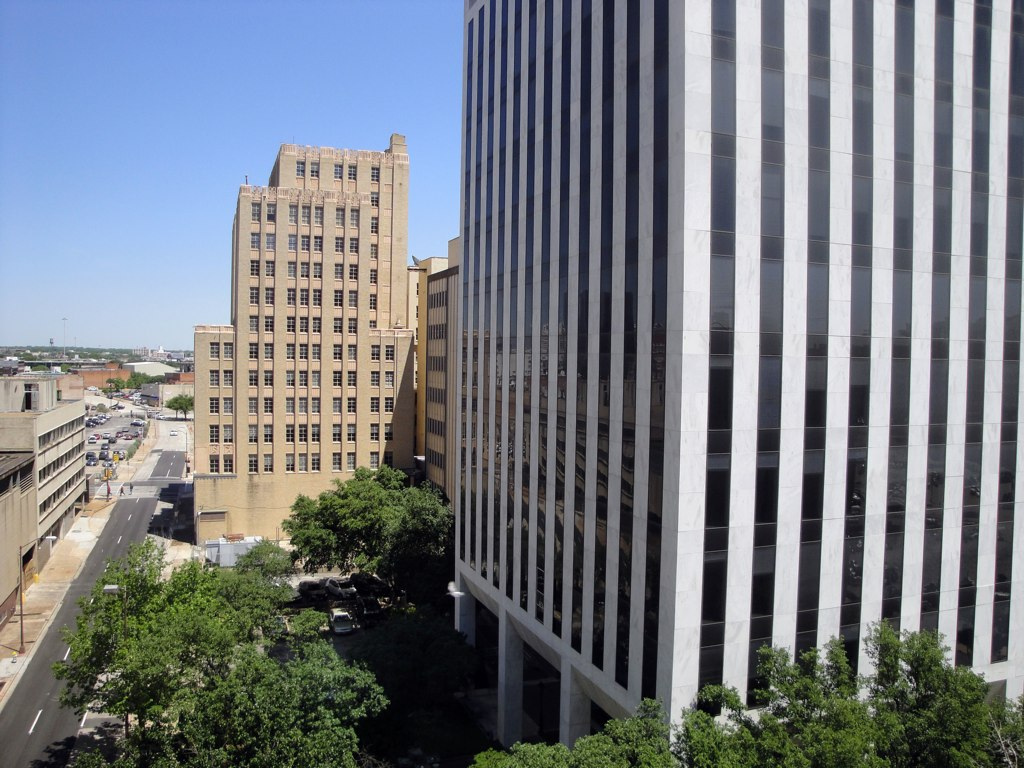 Redevelopment of the former Atmos Complex has officially begun! After a 3-year delay due to the weak economy, Hamilton Properties recently secured financing and construction crews have begun interior demolition of the 4-building complex. In 2010 we posted a look inside the most historic structures – the 1924 Dallas Gas Company Building and 1931 Lone Star Gas Company Building – which are contributing structures to the Harwood Historic District.

The 1966 West Building and 1979 Enserch Plaza Building adjoin the historic structures and were built as the Lone Star Gas Company expanded. The residential conversion project – named the Lone Star Gas Lofts – is unique in that it will house apartment residents of several different income levels.

The white marble Enserch Plaza building at the western end of the block will be the first building renovated into 107 apartments. This building will contain affordable housing options being developed under a partnership with Central Dallas Development Corp. Current work is focussed on this structure, and will later expand to the other buildings (the West Building will become a parking garage and the two historic structures will become market-rate loft apartments).

Upper level interiors of Enserch Plaza are being demolished floor-by-floor, leaving behind a clean shell for new apartments featuring large windows and great views of downtown Dallas. The glass and marble lobby at ground level will contain a leasing office and fitness center; just outside, an outdoor plaza and pool deck will be developed along Jackson Street. Construction should take about a year.

The resulting Lone Star Gas Lofts project will restore the largest complex of vacant buildings downtown, extend redevelopment toward the Farmers Market District and provide a mix of rental options for a diversity of residents.