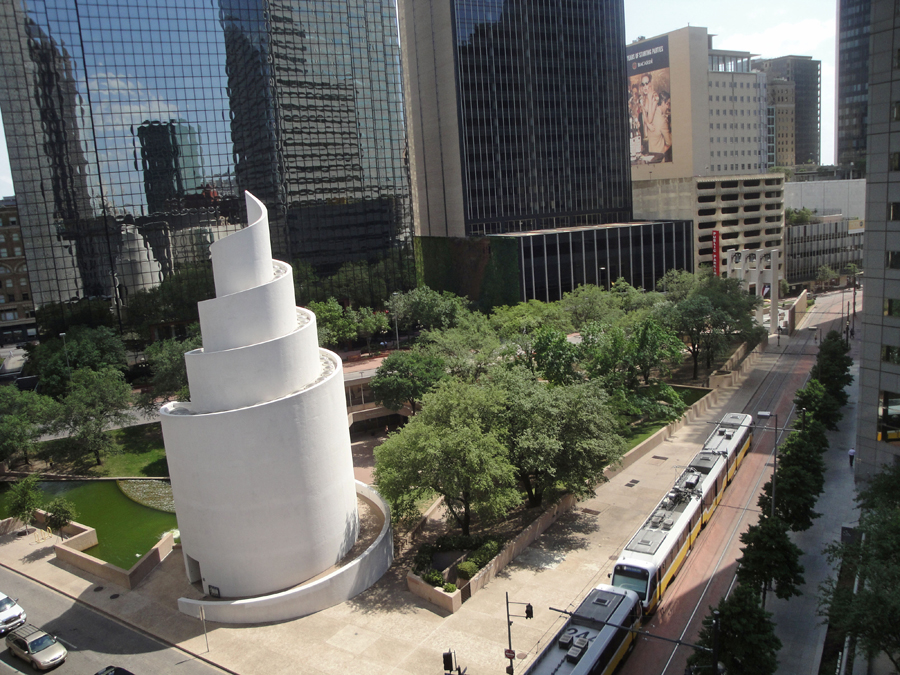 The celebration of thanksgiving and gratitude has a long history in the City of Dallas, stretching back to the first community thanksgiving program in 1861. With the creation of a private park in the heart of downtown, a major infrastructure project spanning 15 years launched Dallas to become the unofficial world capital of thanksgiving. Today we explore the history of Thanks-Giving Square and its many layers.

Thanks-Giving Square began as an idea to set aside land for a place of beauty “dedicated in gratitude to God”. A one-acre triangle of land between Pacific, Ervay, and Bryan centered in the busiest section of downtown Dallas was ideally situated to become a vibrant public space. Surrounded by 1/4 of all major office space in the Central Business District, 55,000 workers and shoppers daily visited the area. In 1962 Peter Stewart — the first to visualize such a project — began campaigning that Dallas needed a central gathering place similar to Rockefeller Plaza in New York City and Union Square in San Francisco. The Thanks-Giving Square Foundation formed in 1964 to begin raising funds for such a project.

By 1966 contributions and donations began to accumulate for the project as substancial press coverage and support from groups around the world circulated. The City of Dallas Parks Department and Plan Commission contributed funds for the purchase of land, forming the first public-private venture in the city’s history; by 1968 all required land had been purchased for the new park for $2.2 million. Grassroots efforts and additional programs by the foundation raised the necessary $1.7 million for the development of the park by 1969.

As plans developed, noted consultant Vincent Ponte completed a study in 1969 for the future park based on recommendations made in his transportation plan for Dallas. These plans — widely supported by the City of Dallas — included the separation of pedestrian, automobile and truck traffic in an effort to alleviate congestion in a booming business center. The development of Thanks-Giving Square was seen by the city as a place to implement these plans — at an affordable price — as a testbed for future expansion to other areas of downtown. Designed were a series of pedestrianways and truck passages linking all nearby office towers together under a beautifully-landscaped greenspace. Balancing civic wishes with the Foundation’s plans for the park, however, were not without disagreement.

Disagreements over the use of the park (balancing public access with the private, religious theme of the park) resulted in a new contract between the city and Foundation in 1972. This resulted in the transfer of ownership for various parts of the project. Prior to this, the city planned to maintain the park with a section of it set aside for public use. With the new contract, complete surface rights were handed over to the Thanks-Giving Foundation for the construction and maintenance of the park. In return, the City would gain control of everything under the garden. Dallas Parks Department exited the project and the Public Works Department became responsible for the underground development of the park (paid for with $5 million from the 1972 bond program). Concerns of limited public access due to walls surrounding the park were addressed with plans for a designated portal to the underground pedestrian network.

Architect Philip Johnson was commissioned by the Foundation to design the garden and his plans for a “serene, green island coursing with life and movement” were revealed in 1971. All religious symbols were omitted from the design, embracing thanksgiving as a universal concept having meaning to all faiths. The centerpiece of the garden was a stark white spiraling chapel.

Small retail buildings on the site were demolished and excavation began in April 1973. Construction of the truck terminal on the lowest level (located 50 feet below ground) was the first to be built. The $6.5 million terminal addressed the problem of delivery trucks regularly blocking traffic lanes — moving the unloading process underground and out of sight. Access to the terminal was provided by the conversion of Bullington Street into a ramp at Patterson Street; at a later time the terminal could be extended to a series of underground truck roadways snaking around downtown (but no other truck terminals would be implemented as planned).

Loading docks for 43 trucks were provided with cartways extending to new freight elevators and conveyor systems in the basements of surrounding office buildings (Republic National Bank Building, Medical Arts Building and Fidelity Union Life Building & Tower); freight was transfered via electric carts. With this system, it was estimated that up to 350 trucks daily could be removed from city streets. As new buildings were developed, additional cartways could be constructed and the city would recoup construction costs with usage fees.

Above the Bullington Truck Terminal was constructed a layer of pedestrian walkways providing access to Republic National Bank Building, Thanks-Giving Square and the Bullington pedestrian mall. Extra care was made by architects to design the pedestrianways to include ample natural light, wide corridors and attractive features. 14,000 square feet of shop and office space were included on this level in hopes of generating revenue for the city (although park planners were afraid retail shops would commercialize the theme of the garden). The pedestrian segment became one node in a planned system connecting employees with parking, shops and attractions (along with an unbuilt subway transit system under Elm Street).

Construction of the garden began atop the pedestrianways (the Dallas Public Library has photos of construction). Progress was slowed by construction challenges involving the chapel’s unique shape, but it was consectrated along with the bell tower in November 1976. In May 1977, the garden was finally opened to the public.

In 1996 the western end of the garden was expanded to include additional features, and boundaries of Thanks-Giving Square were increased to include neighboring street corners with entry pylons. In the same year DART began light rail operation adjacent to the garden along Pacific Avenue.

Thanks-Giving Square features several elements that reflect the theme of gratitude and thanksgiving through architecture and symbolism. The Chapel of Thanks-Giving rises above the sunken garden as the focal element on the eastern side of the Square. The white “spiral of life” constructed of white marble aggregate suggests the “upreach of the human spirit.” Visitors approach it from a long bridge over the main fountain and are greeted by artist John Hutton’s etched dove above the doorway. The inside of the chapel is a simple with a 1-ton Carrara marble alter. The real beauty is seen above where the “Glory Window” (one of the largest horizontally mounted windows in the world) spirals toward the top of the ceiling.

Below the chapel is the Hall of Thanks-Giving, a columned room which hosts special events and displays the history of Thanksgiving in America. Gentle fountains create an interesting environment.

At the west end of Thanks-Giving is the Bell Tower (with 3 large bells) and Ring of Thanks that serve as another entrance into the garden.

The various walkways from the entrances located at each corner lead to a Center Court in the middle of the garden. A 4-foot wall blocks traffic noise and sight of automobiles, while many water features mask the noise of the surrounding city. A side grove of trees with a large waterfall (the Wall of Presidents) and an elevated overlook branch off the main walkway to provide additional areas of reflection.

The pedestrian level, accessed through doors near the Center Court, wind under the garden in varying color-coded corridors. At the lowest level, the Bullington Truck Terminal is purely functional in design.

Reviews of Thanks-Giving Square’s design were mixed from the start. Some early visitors commented on the lack of green space for a park that was supposed to be a green island. Others viewed it as a place designed with architects — rather than people — in mind. The urban design of the space has come under debate in recent years as the Square adapts to a changing neighborhood.

When the park opened, it was centered in the midst of towering office buildings; the garden’s popularity later encouraged the construction of Energy Plaza and Thanksgiving Tower on either side. As the only green space in downtown, the Thanks-Giving Square became popular with the daytime lunch and office crowd seeking an urban oasis. As economic reasons forced many of the older buildings downtown into vacancy, visitor patterns shifted although the Square remained an important gathering point for many activities in the area.

In 2005 many of the surrounding buildings began the transformation into residential apartments. The Mosaic (former Fidelity Union Building), Republic Tower and 400 North Ervay (the former U.S. Post Office & Courthouse) all saw new life, but the addition of hundreds of residents had unforeseen consequences on the garden: dog waste. Closing the garden in the evenings made little difference since determined visitors could easily climb the 4-foot wall. Combined with shade issues affecting the lawn, the once lush greenery was trampled and certain areas of the garden became dust-blown and deserted.

At age 35, Thanks-Giving Square has begun to show its age, and deferred maintenance has rendered its pedestrian lights inoperable and fountains unpredictable. Many of the systems, graphics and infrastructure haven’t been updated since the 1970s. While maintenance costs are understandably high for a non-profit, the perceived neglect leaves visitors with a bad impression of the downtown area.

Facing these challenges, the Thanks-Giving Foundation is planning to upgrade the Square for the 21st Century and the Foundation’s upcoming 50th anniversary. Small projects have already begun to engage the surrounding community: Thanks-Giving Square is regularly visited by food trucks during special lunchtime events, inviting downtown office workers to eat at moveable tables now placed in the Center Court. The garden is also now open at all hours of the day for downtown residents.

More comprehensive plans may include addressing street level access and security issues within the Square. While the pedestrian network will continue to exist beneath privately-owned buildings, walls surrounding the garden make it difficult for those wanting to visit from the street. Creating additional passageways and increased interpretive signage would add visibility to new activity taking place. Challenges will include updating the usability of the space while remaining true to the Foundation’s mission (recent renovations of Fort Worth’s Johnson-designed Water Gardens modernized that park while preserving the architectural character).

The non-profit Thanks-Giving Foundation has hosted many area events in the Square over the years, truly making it a center of thanksgiving for the region and country. Since 1973 a series of seminars have brought together academic minds to discuss various aspects of gratitude. These seminars have included visits from notable speakers — including the Dalai Lama — and partnerships between universities and knowledge centers around the world.

The chapel is regularly used by individuals for prayer and those seeking personal reflection. The Square has been a place for interfaith services, song festivals, celebrations, and community events open to all religions. An example of one such event, on May 3, 21012 Thanks-Giving Square will host Prayer in the Square, a day-long celebration of religious freedom and the power of prayer.

Thanks-Giving Square remains a unique place in the urban landscape of Dallas with a very interesting history. As this landmark adapts to a changing downtown, many are hopeful it will continue to be a vital gathering space while also becoming a prized community and neighborhood space.