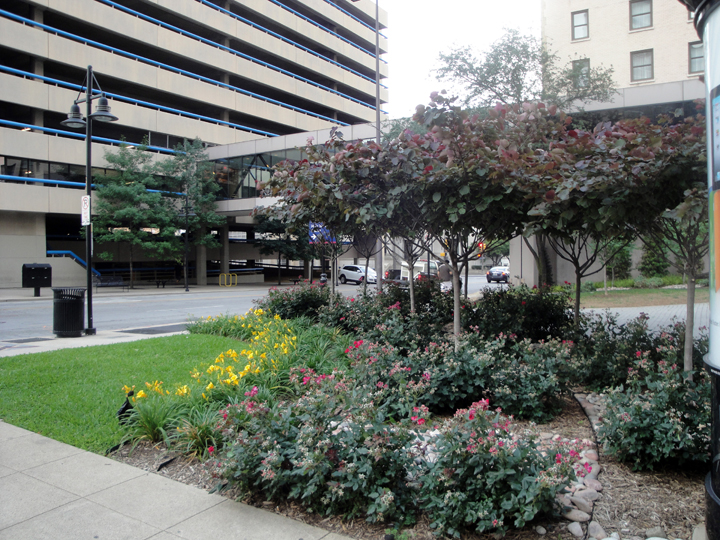 It’s been about one year since major modifications took place at the pocket park located at Harwood and Elm Streets. Let’s review how the advertising and landscape changes continue to affect the district.

The pocket parks along Elm (referred to here as the “Harwood Pocket Park” at Elm/Harwood and the mid-block “Elm Street Pocket Park”) are the result of insensitive construction of the huge Elm Street Garage. In 1985 The Cadillac Fairview Corporation purchased various commercial structures lining Elm Street and demolished these to connect their 49-story 1700 Pacific Tower (built as First City Center in 1983) to the parking garage via skywalks. Two pocket parks were constructed along the skywalk length to reserve land for future development.

When 1700 Pacific sold in 2005 Lincoln Properties began managing the properties and pedestrian connections. Despite updates to the pedestrian passageways in 2010, the parks remained a bit worn and dated but well-maintained.

Dividing the small parks is 1920 Elm Street — a small parking structure directly across from the Majestic Theatre that is, perhaps, the ugliest structure in all of the Harwood Historic District. The garage and pocket parks coexisted without much notice until 2010, when an expanded City of Dallas sign ordinance allowed additional large-scale advertisements (Supergraphics) in the downtown area. Looking to make a profit from the opportunity, the garage owners secured permission to cover their large brick wall facing Harwood Street. While the issue of Supergraphics in a historic district is another issue, others thought the colorful ads would bring more life and color to the corner rather than a big, blank wall.

Fuel Outdoor — the company responsible for this particular Supergraphic — installed an ad just in time for February 2010’s NBA All-Star event. In doing so, however, their installation contractors permanently damaged the 20 year old live oak tress in the Harwood Pocket Park. Lincoln Properties fought with the responsible party to fix the situation, but in the end all but one tree was beyond saving. Unfortunately the trees were removed over a quiet weekend without warning to nearby property owners or residents. Naturally, suspicions were raised and the erection of the new ad became a hot topic for discussion (see the first news story here, video here and other opinions here). Once the story emerged, Lincoln Properties pledged to restore the park as best as possible and held true to their promise: soon after, new landscaping was in place.

Despite the initial lament over the removal of mature trees, the replacement landscaping fits well into the urban setting. In fact, the tree removal has resulted in better security and fewer bird issues on the busy corner. Colorful flowers, bushes and magnolia trees add some variety to a corner that was stale and dark. And of course, there’s now a clear view of the Supergraphic looming overhead. While Lincoln Properties did right to repair damage caused by contractors, they could have taken the opportunity to improve a corner park that is generally a wasted space in the heart of downtown.

The pocket park serves as a connector between Harwood Street and attractions along Elm Street, and  an attractive park encourages downtown employees to walk on the sidewalk rather than the skywalk. But designed as a connector it does little to encourage lingering. Benches could have been added to encourage passers-by to take a moment to admire the landscaping (a bench is not an automatic welcome for the homeless, as some fear). A kiosk for news, information or retail could tap into the many people passing by on their way to work. Informational panels explaining the architecture of neighboring structures could have been included. Instead of any design improvements, the existing pathways were simply re-skinned with a change of foliage.

A few steps away the Elm Street Pocket Park was never damaged by contractors, but it now sits as an ignored, useless plot of land. Until the opening of Main Street Garden, this pocket park served as the main dog relief area for residents at 1900 Elm. Being surrounded on three sides by walls, little air circulation and security risks from people sleeping overnight caused Lincoln Properties to close the park indefinitely. An iron fence was installed in 2010 to prevent public use of the park.

Both of these pocket parks have great potential for the Harwood Historic District but are limited in possibilities because of private ownership and the parking structure dividing them. The parks could be could be redeveloped for new structures, but replacing the parking garage with a new, mixed-use structure would be an ideal solution for the block. Integrating the private pocket parks with a modern office building could create a sustainable indoor/outdoor experience. An exciting entrance could face a redesigned Harwood Pocket Park (converted to a modern plaza); a ground floor restaurant could spill out onto patio dining in an intimate Elm Street Pocket Park. This change of land use would create a destination along the south side of Elm Street where currently people speed from one end of the block to the other. Being across from the beautifully restored Majestic Theatre connects the 21st Century user to the city’s cultural history.

The real improvement to this stretch of property may come with the evolution of the skywalk system. As designed, the passageways once included several doors and stairways into the parks. These entrances are currently closed due to modern security needs, one of the challenges facing the Dallas Pedestrian Network (but that’s a story for another day). If these entrances were restored and re-opened the sterile, climate-controlled environment could be better connected with the outdoors.

As more people live and work downtown pocket parks will become an essential supplement to larger public parks in the neighborhood. They create small areas of respite from the business of the city. If designed well, they can create spaces for impromptu gatherings and greatly enhance a sense of place in the community. The owners of pocket parks in this dynamic area of the Harwood Historic District should commit to incrementally improving their parks as the neighborhood grows and evolves.