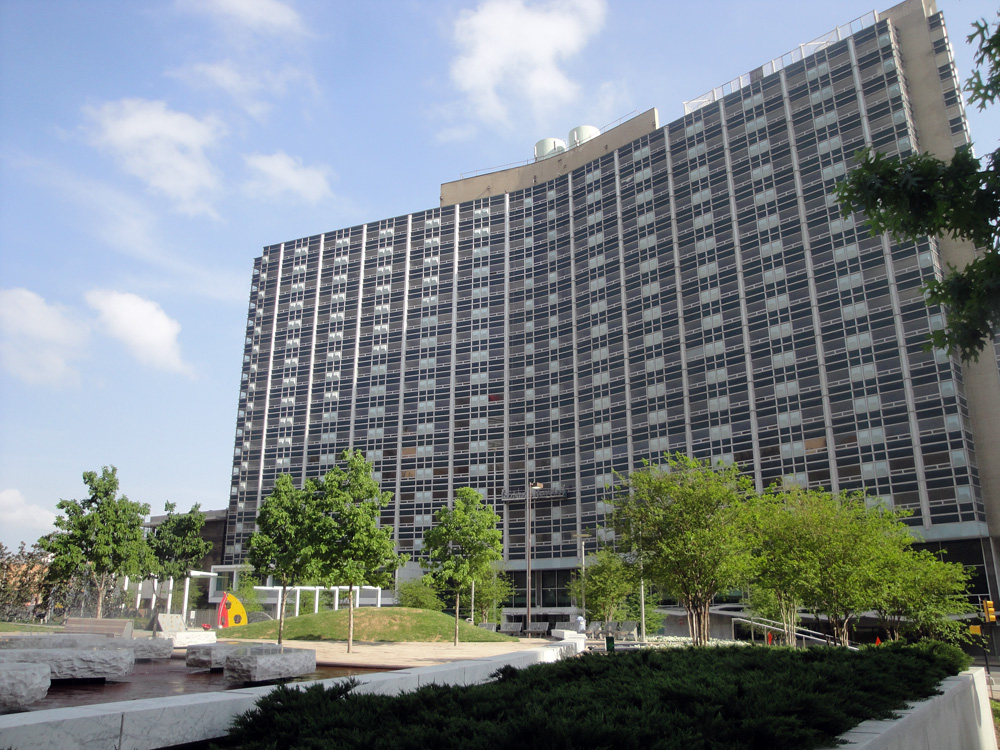 In April 2011 we visited the Statler Hilton when work was commencing to clean and restore the massive building (read about that visit here). One year later, we were invited back to view the progress and learn about discoveries that have been made.

Over the past twelve months crews for the Ricchi Group — the team behind the project — have been busy cleaning the building from the inside-out. Hundreds of former hotel rooms were left fully furnished; asbestos covered pipes and layers of wall decor had masked original Mid-Century finishes inside the building. While barely noticeable from the outside, interior work has removed countless old mattresses  and truckloads of debris from the property.

Various remodeling work over the course of 40 years had reconfigured much of the space inside of the hotel. Areas that were originally light-filled and spacious had been divided into smaller, dark rooms and forgotten corridors. Using copies of original plans obtained from the architect’s office, the renovation team have removed walls non-original to the building (keeping those deemed historical). This has opened up the space and allowed natural light to filter into the heart of the building. It also makes the visitor aware of just how large the structure is — clear spans are nearly the width and length of a full city block.

The laborious work has induced moments of treasure hunting inside the building. Using original plans as a map, teams have searched for and uncovered materials hidden under layers of paint and alterations. Much of the granite on columns still remained, hidden behind tacky wallpaper; terrazzo floors were discovered under carpet. These elements have been been retained and will be restored when the building’s interior is reconstructed. One of the biggest changes from one year ago is the revelation of the black granite elevator lobby (compare it to this photo).

The Statler’s famous Empire Room was cleared of modifications and 1970s kitch; hidden behind a kitchen wall for decades, a 40-foot, long-forgotten mural designed by artist Jack Lubin of New York made headlines during its rediscovery. The colorful, modern piece of art — still in good condition — will be preserved for display in the reborn building.

Some of those 1970s elements of the Empire Room not original to the building were removed and found new homes. Two large carved wooden doors now welcome diners to Wild Salsa  — a nearby restaurant opened in 2011.

On the exterior, a gloomy driveway canopy was demolished and will be replaced with a historically-appropriate design. Row by row, upper level windows and exterior porcelain tiles have been cleaned and buffed to their original brilliance. Other sections of the facade will be restored, and original paint colors have been reapplied to masonry elements.

Moving upstairs, the corridors and hotel rooms all received a good cleaning. Furniture removal resulted in a space that is bright and open, although the tiny room sizes show that guest comforts 50 years ago were not as they are today (many of the rooms were later combined and enlarged).

Though a final concept has not been revealed, one option for the building’s transformation envisions 320 apartments formed out of the former 1,000 hotel rooms. One of the biggest hurdles to redevelopment was a persistent rumor of short ceiling heights in the upper levels (as noted in our previous discussion, this was due to unusually small doors which exaggerated claustrophobia). With the doors removed and put into storage, Ricchi Group set out to prove the critics wrong with the creation of a model apartment unit.

The unit on display — made up of four former hotel rooms — features two bedrooms, two baths and a large open concept living area. White porcelain floors reflect natural light around the room and reference the Mid-Century styling of the Statler. Ductwork has cleverly been worked into the interior wall to keep the ceiling a full nine feet tall.

The large original windows allow plentiful light and will be restored to original finishes near the completion of the project. Even though the unit is on the fourth floor facing busy Commerce Street, noise inside was barely noticeable.

The development team will utilize feedback gathered in the next phase to refine the model unit and incorporate ideas submitted by visitors. Though a hotel concept could ultimately be chosen, the prospect of several hundred apartments overlooking this vibrant area of downtown is exciting.

Back at ground level, potential for the lower levels is equally interesting. The vast amount of space could host several restaurants, street-fronting retail, a bowling alley, or even a movie theater; parking for residents or visitors could easily be accommodated in a basement garage. The Statler — and the Old Dallas Central Library next door — could truly be reborn as a city within a city.

There’s still a year of progress to be made before the doors can reopen on this landmark structure. Excitement is building around the building’s future, but there’s still much to do. What amenities or features would make the Statler an attractive place to call home? Are there suggestions or tips for the development team exploring residential conversion?

For additional views of the one-year progress, check out photos here.