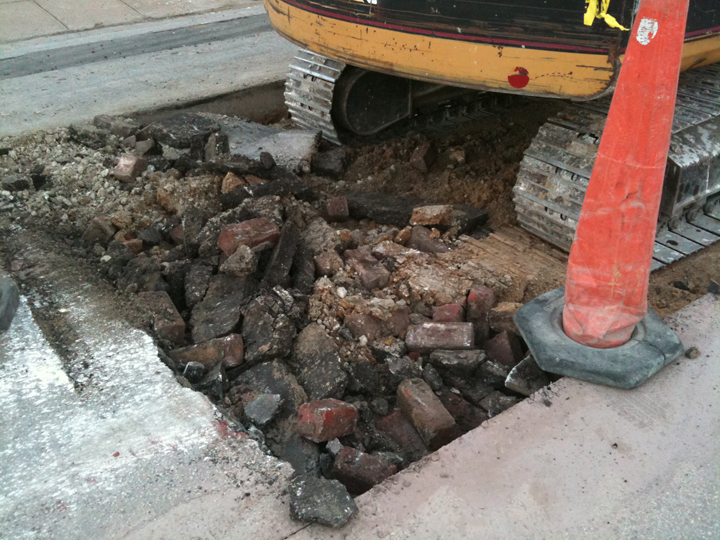 Last week there was a small window (actually, more like a pit) into history along Jackson Street. Dallas Water Utilities has been working for several months on pipes lying under the old street; the work is most likely addressing a major water main rupture that occurred in November 2010. Crews have been digging wide troughs through the center of the street — revealing layers of asphalt and the original brick paving below.

Paved streets were all the rage (and an important asset) in the growing city of Dallas in the early 1900’s. As the city expanded original dirt roads were paved with asphalt, vitrified brick (glazed to make it stronger and impervious to water), bois d’arc (creosote-treated pine), macadam (gravel bound together with tar) or bitulithic (a patented mix of asphalt with cement coating).

In 1908 — a year in which more than 13 miles of city streets were paved — Jackson Street received brick with asphalt filler set on five inches of gravel foundation. The Dallas Morning News reported that property owners were required to pay for improvements in front of their property: $2,467 per foot of street frontage for paving,  50 cents for a curved concrete curb and 45 cents for a straight concrete curb. Sidewalks were traditionally added only after a street was paved, and Jackson received them in 1910.

A population growth of 100,000 people during the 1940s caused pressure on the narrow, congested downtown streets as vehicle ownership increased. The neighborhood also changed as residences were replaced by commercial structures. Jackson and Wood Streets — parallel east-west routes — were some of the first downtown streets converted to one-way operation in 1946 (Wood Street terminated at Harwood until 1958). But, that wasn’t enough; at the urging of the Citizens Traffic Committee in 1950, Jackson Street was widened for vehicle traffic by removing five feet of sidewalk on either side. This type of road modification — to get vehicles into and out of downtown as fast as possible — was duplicated across downtown resulting in many one-way streets and narrow pedestrian sidewalks.

With newer thoroughfares (Young Street) later taking most traffic, Jackson and Wood Streets became wider than necessary for vehicle traffic and not wide enough for pedestrian amenities or landscaping. The one-way, 3-lane street encourages fast traffic and reduces accessibility to businesses; the street as currently designed serves as a service alley for businesses fronting Commerce Street. The poor street life might have been helped by DART, which considered using Jackson and Wood Streets for a second rail alignment through downtown before abandoning the idea (the driveways require retaining vehicle access, making the corridor too narrow for light rail vehicles).

Fifty years after Jackson’s brick paving, efforts to reclaim other downtown streets for multi-modal use — referred to as “complete streets“– are underway. Many of the narrow streets in the business district are scheduled to be converted back to two-way, slower-traffic corridors. Enhanced pedestrian amenities and bike facilities are encouraged by the Downtown Dallas 360 Plan to enliven the streets and discourage fast-moving vehicle traffic. Harwood Street retains its pedestrian scale with two-way traffic, on-street parking and wide sidewalks. As redevelopment straddling Jackson Street becomes a reality, city leaders should reconsider the future of streets in the Harwood Historic District. Narrower street lanes, wider sidewalks and slower traffic will go a long way to returning the street back to its livable neighborhood feel. Perhaps they can even restore/replace the hidden brick paving.