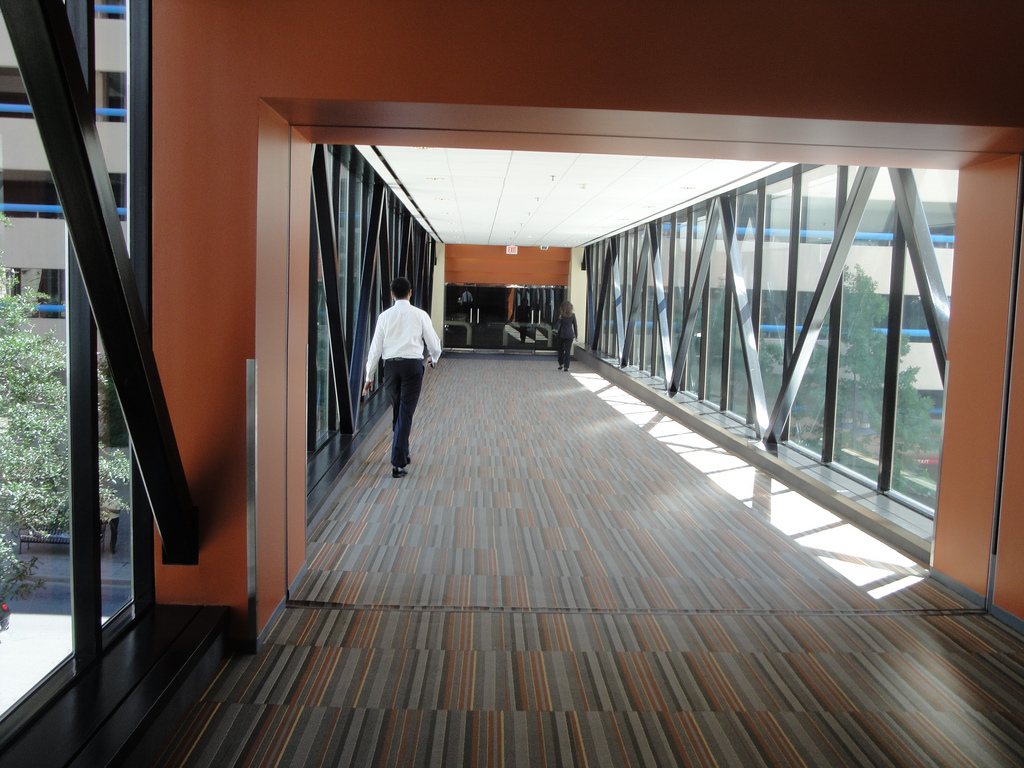 The Dallas Pedestrian Network snakes through downtown connecting parking garages, hotels, office towers and residences. Conceived in the late 1960s as a way to separate pedestrians from auto traffic, it evolved into climate controlled walkways below and above the streets of the business district. Some sections contain shops and restaurants, while others serve as sterile corridors between buildings.

Primarily funded through private development, the network has followed the Ponte/Travers Plan to connect more and more structures with every building boom. Tunnels under streets and underground plazas — hidden from view of sidewalk pedestrians — evolved to include elevated walkways and street level pedestrian malls. Originating in the center of Dallas’ Main Street business district, the network had been extended as far east as St Paul Street by the late 1970s.

Moving east to the Harwood Historic District, Pacific Place — a red 20-story building at 1910 Pacific adjacent to the Majestic Theatre — opened in 1982 with the Elm Street Garage one block away; both were constructed by Cadillac Fairview Urban Development. In 1985 the owners approached City Hall requesting a series of sky bridges to connect the new building with “future development” and the Elm Street Garage. Unlike tunnel construction of previous years, this plan included something never permitted in the Central Business District: a sky bridge over one of downtown’s major east-west streets. Many questions were raised about the impact a bridge would have over Elm Street, since the street contained one of the few remaining grand vistas downtown. Other critics questioned the negative impact the bridge would have on the Majestic Theatre, which had just completed $4 million dollars of publicly-funded renovations by the city. Building the sky bridge, some feared, would forever destroy the view of the Landmark Structure from the west side.

Even though development documents lacked any details on the effect of the bridge, city planners pressured City Council to approve the request on grounds that it followed the long-term plans for the pedestrian network. Shortly after, the bridge was approved. The worst fears were confirmed as heavy steel beams were put into place and blocked the view of the Majestic Theatre. The end result: the view down Elm Street was forever lost due to one company’s desire to connect their building to a parking garage.

The decision by council members last April to permit Cadillac Fairview to construct a steel skybridge just a few feet west of the historic Majestic Theatre is one of the biggest mistakes they will make in their political careers. — The Dallas Morning News,  1985

The events of 1985 resulted in new dialogue throughout the city: the growing Arts District struggled in gaining support as voters feared city funds would benefit developers instead of the arts; and preservationists rallied for stronger protection surrounding City of Dallas Landmarks.

A year after the sky bridge was completed ownership company Cadillac Fairview was put up for sale, but the pedestrian network continued expanding into the eastern side of downtown. In 1986 Momentum Place (now Comerica Bank Tower) tunneled under St. Paul to form a second connection with the Elm Street Garage. Using a portion of the Titche-Goettinger Building’s basement (the department store was also joined to the system), the tunnel connected to the existing elevated section.

The construction of the bridge/tunnel connection replaced smaller commercial structures with empty plazas for “future development.” These pocket parks are detailed in a previous post here. The creation of the Harwood Historic District in 1990 prohibited any new pedestrian bridges in the neighborhood, but the sky bridges and tunnels continue to function as connections through the district.

Today the affect of the pedestrian network on street life is still debated and new studies will determine their future. It’s clear that the connections along Elm Street  (climate-controlled corridors devoid of retail) will remain, serving as vital connectors between employees and parking . Within the Harwood Historic District entrances to the pedestrian network exist at the Elm Street Garage, Hotel Indigo, Majestic Parking Garage, Universities Center at Dallas, 1900 Elm, Pacific Place, Tower Petroleum Building and Corrigan Tower. The elevated walkway carries a lot of commuting pedestrians, and Elm Street below also sees a lot of sidewalk traffic. However, construction of the pedestrian network (and demolition of buildings) created gaps in the urban framework of the block; with a lack of street level retail there’s little reason to choose the sidewalk.

Even though there are numerous connections to buildings in the district (and beyond), there is little indication of entrances. The lack of a centralized oversight authority has resulted in difficult-to-navigate corridors with limited (or non-existent) signage. Doors that face Elm Street have long been locked. Public elevators have been abandoned. These doors and staircases leading directly to the street or into pocket parks could help promote street life, but instead continue to segregate the crowds. Once inside the corridors it’s nearly impossible to find a way out to street level. This is one of the greatest challenges of the pedestrian network as it exists today.

Despite the troubles, placing blame on the network for all of downtown’s retail or pedestrian issues is not the solution. The city and private developers have invested a considerable sum in the pedestrian network. To abandon this infrastructure would destroy an asset many of the downtown employees use daily. Many cities around the world have similar systems seemlessly connected to street life and transit options, but easy connections are what Dallas’ system is lacking. While the expansion of the pedestrian network may not be best for downtown’s vitality, new avenues should be sought to leverage the most from what is currently in place.

A simple upgrade of the wayfinding system at entry points could be a solution to accessibility. Directing pedestrians to cultural treasures, public spaces and destination retail at street level — along with giving them an easy way to get there — could greatly help downtown’s street life. A map of the system has not been published for years, and clearly marked entrances are rare. Seeking to address this need, there are plans in the works to create a comprehensive map of the Dallas Pedestrian Network. The map would — for the first time — show building connections AND access points along with important downtown destinations. It’s hoped that this project could promote cross-patronage of all downtown businesses for little investment. Hopefully other improvements to accessibility will follow. If you’d like to support this effort, please visit the project here.

Pressure should also be placed on building owners to reopen access points along the network. These elevators, doors and staircases — some of which are maintained by the City of Dallas — currently detract from streetscape improvements and create a sense of neglect. Over several years an entrance has been closed on one block, followed by another entrance around the corner. As building ownership changes so too do the course of the corridors within those buildings. Instead of ignoring the problem of accessibility, a group separate from the owners should ensure these entry points are used to their greatest potential. Create better connections to mass transit, street level plazas and recent park investments; these were all recommendations of the original plan that were never fully realized.

The effect of the Dallas Pedestrian Network on the Harwood Historic District can clearly be felt along one of the district’s greatest streets. But now that the system is in place and daily serves a population, city leaders should find ways to connect missing links and take advantage of the infrastructure. With streetscape improvement along Elm Street, refreshed pocket parks and better accessibility to the Dallas Pedestrian System, we may be able to convince users to step out of the climate-controlled environments for a moment and marvel at our street-level cultural resources. And instead of allowing incrementally unwise decisions to erode our street life, we should find ways to reclaim it for the pedestrian of the 21st Century.

Downtowns don’t grow cold and uninviting because of single grand mistakes. Rather, they are done in by sequences of small, ill-advised decisions — such as routinely approving individual skybridges without consideration of their larger consequences. — The Dallas Morning News,  1985

UPDATE: A new map of the Dallas Pedestrian Network was published in Januarly 2012 and is available for download here.