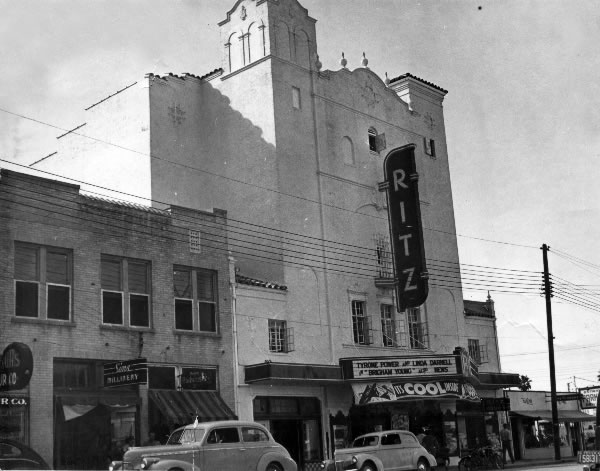 We venture to South Texas today to learn about a preservation project taking place in Corpus Christi. In a downtown area challenged with empty storefronts and crumbling infrastructure, a group of citizens have been busy working to bring the venerable Ritz Theatre —  placed by Preservation Texas on the 2012 list of Texas‘ Most Endangered Places — back to life. Last week we received a private tour to learn about their project.

The Ritz Theatre opened in Corpus Christi on Christmas Day 1929, one of the largest and finest entertainment palaces in the state. Built by theater pioneer Bruce Collins, the theater was designed for vaudeville and movies by noted architect W. Scott Dunne — who also designed Fair Park’s Band Shell and the Texas, Arcadia, Esquire, Melba and Tower Theatres in Dallas. The theatre was clearly Spanish Renaissance in design, featuring an ornate mission-style facade along Chaparral Street (anchoring the city’s main commercial street at the time) and an Art Deco-influenced interior.

Before entering the auditorium, movie-goers entered the double-height lobby featured a dramatic entrance with mezzanine balcony overlooking the floor below. The deep 1,300-seat auditorium was decorated in the “atmospheric” style popular at the time, intended to give the illusion of being seated beneath an open sky. A blue painted sky (with moving clouds and twinkling stars) above embellished walls placed theater patrons in an exotic Spanish courtyard. A dramatic proscenium arch framed the performance stage and was flanked by large towers and domes. Though space was designated for a theatre organ, it was never installed due to the waning popularity of silent films.

The Ritz was part of the Robb and Rowley Circuit (later part of United Artists Theatres), showcasing a mixture of live entertainment and movies. During World War II, well-known bands performed for military personnel and the local community. The interior of the theatre changed to match trends, and the proscenium arch was later removed to increase the movie screen size. After movies ended in 1972, the theatre reopened as the Ritz Music Hall in 1974 and Ritz Productions in 1976 — featuring acts from Willie Nelson to Metallica. Amateur theater groups later occupied the Ritz until its final closure in 1989.

Over the following years unsuccessful attempts were made to restore the theatre, and the surrounding business district saw more abandonment than reinvestment. Sensing an opportunity to refocus attention on Corpus Christi’s cultural treasures, in 2004 two businesswomen founded PATCH — Positive Action Towards Cultural Heritage. Reviving the Ritz, they believed, would inspire the local creative class and kickstart rebirth in the central city.

The owner of the Ritz — Dallas resident Robert Rowling (founder of TRT Holdings, the ownership group for Gold’s Gym and Omni Hotels) — agreed to donate the building to a non-profit organization with plans for restoration. The donation was made via a gift deed on December 2010, allowing PATCH to begin the fundraising process and detailed plans. Since that time, large numbers of volunteers have joined committees and local college students have taken an inventory of the building (no blueprints of the building have been found).

Public outreach is beginning to have an effect. The building has become a featured stop on the popular First Friday Art Walk that weaves its way through downtown Corpus Christi. Its inclusion on the 2012 list of Texas‘ Most Endangered Places may help expand awareness. The group hosted several ghost tours to raise money, but those events ended after the ghosts became “too real” and the building required a spiritual cleansing (some say it’s still haunted). Other fundraising efforts have helped save for the estimated $6.5 to 8 million restoration cost (with a goal of $1.5 million raised by the end of 2013). If all is successful, PATCH hopes to have the Ritz Theatre fully restored and open to the public in five years as a mixed-use performing arts center capable of showcasing drama, dance, comedy, music and films. A similar restoration was done to the Plaza Theatre in El Paso (originally designed in the same style by the same architect).

In a city where sentiment toward historic preservation is apathetic and major donors are hard to come by, PATCH is reaching out to donors across the country (and those with former connections to the Bay Area). The citizens behind this project need encouragement from other regions as they face local challenges and unfamiliar territory. Corpus Christi is beginning to discover what Dallas has realized only recently: that the success of downtown directly impacts the types of people and businesses that move into the city. There, plans are now in place to encourage residential development, improve the pedestrian experience and reinvest in the area. Hopes are high that restoration of the Ritz Theatre will stimulate additional cultural preservation; perhaps it will also encourage Corpus Christi’s downtrodden commercial area to realize its potential.

Want to help? Spread awareness about this exciting project, or view updates/donate on the group’s website. Additional photos from a recent tour can be found here.