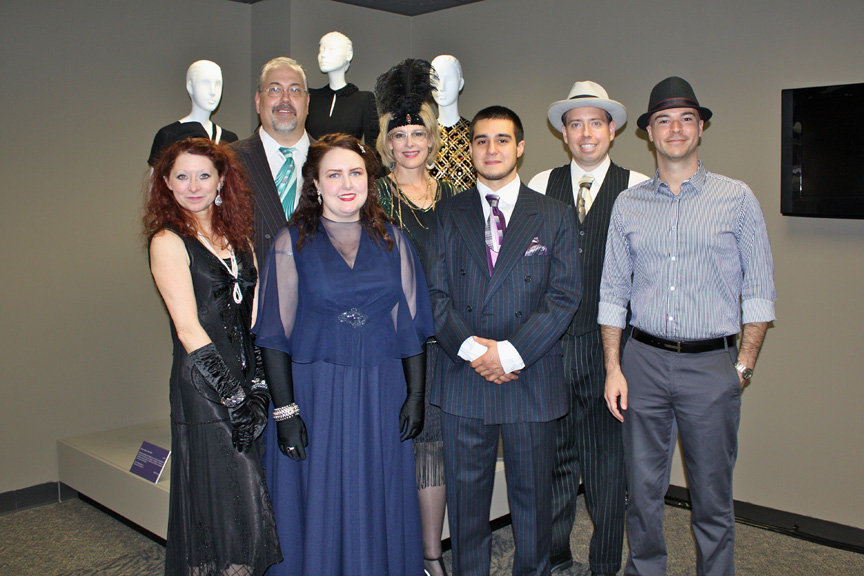 The Titche-Goettinger Building celebrated its 82nd birthday with a community history day on September 10, 2011. The goal of the event was to celebrate the history of the building by showcasing the building’s architectural features and storied past to the entire community. Over 75 residents, community leaders, and preservation experts attended the event which was hosted by nine resident volunteers dressed in period attire.

Dallas Center for Architecture supported the event by hosting a morning Main Street District walking tour, ending at the front door of the Titche-Goettinger Building. The afternoon history event then commenced on the ground floor concourse of the building , where Noah Jeppson led a brief discussion about the building’s history and the significance of its architecture (much of which can be read HERE). Large-scaled historic photos were on display near the presentation to aid in the story telling, since many of the original spaces have since been altered.

Michael van Enter – a local conservator responsible for many restoration projects – then discussed some of the craftsmanship involved in the original building decorations. His studio restored two original column capitals that were found to contain original Art Deco paint schemes for the ground floor (all other columns were painted silver in a later renovation). One column capital was lightly cleaned and a second capital was restored with colors that gave the plaster great depth (including beautiful shades of aluminum paint). These display pieces provided for an interesting discussion about the artistic process, and serve as good references for future building renovations.

Visitors to the event were then treated to a tour of some of the building’s most-unique spaces. The entrance on St Paul street was cleaned and opened for the day. This entrance holds special significance because it contains the only original wooden entrance doors and display cases from 1928. Period garments were displayed in window cases and frames much as they would have been 80 years ago.
Elevator #1 – virtually intact from its 1950s appearance and no longer operational – was cleaned and opened for display, revealing the original brass manual control system and store directory. Visitors were able to step inside the secured cab and imagine the once highly-publicized holiday service to “Titche’s Santaland.”

Other points of interest along the guided tour included the exterior facade, basement, original stairwell, historic ballroom (in an unoccupied unit), a modern loft (occupied unit), and the 1950s addition (now the UNT System Building). Fashion on Main opened its gallery for a special exhibition on period fashion and received many visitors.

The successful event showcased local history to regional attendees in a fun, memorable way. Visitors from the surrounding neighborhood ventured inside to learn about the building; many were previously unaware of the history. Former employees and customers of Titche-Goettinger were happy to see that the building still remains, and many shared experiences during the open discussion. Preservation groups and architecture enthusiasts were impressed at the amount of detail still preserved inside the building, and the potential for more restoration work was noted. Best of all, the event brought history alive to residents within the building, making them part of the effort to preserve and promote their special community.

This Community History Day initiated discussion of the Titche-Goettinger Building within the local community. Due to its success, annual events may continue to celebrate the building’s place in Dallas history. Through a dedicated display area (recently added in the lobby) and additional building identification the story of Titche-Goettinger can be told throughout the year.