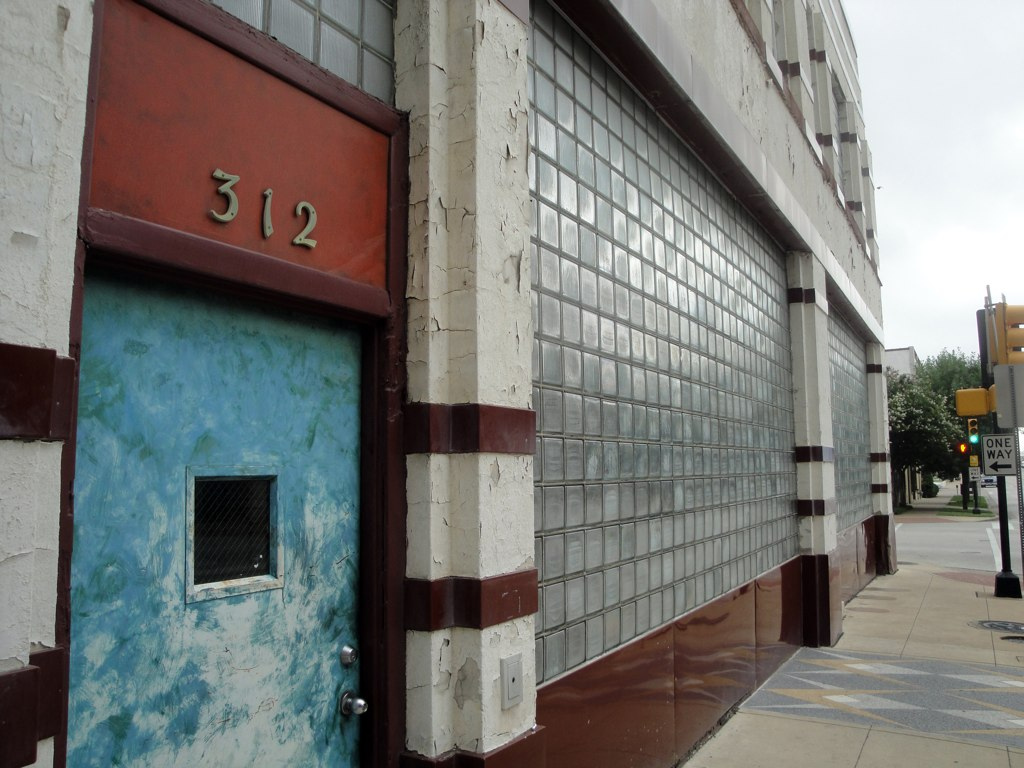 Today we explore 312 South Harwood, a distinct small structure at the corner of Harwood and Wood Streets that is a Contributing Building to the historic district.

Located along a busy stretch of Harwood Street the brick and timber structure — similar to many early 20th Century buildings in the neighborhood — made it perfect for commercial uses as the residential neighborhood transitioned to an expanding business center at the end of the first World War.

Within the blocks bounded by Commerce, Pearl, Young and Harwood Streets dozens of theater-related businesses were concentrated. Unlike the west side of Harwood — which featured imposing structures such as the Lone Star Gas Building, First Presbyterian Church and the Masonic Temple — the east side of Harwood retained smaller buildings creating a unique business community. Nearly 80 film-related businesses included agencies, theater supply manufactures, popcorn suppliers, theater architects and film exchanges by 1950. These businesses not only served the theaters on Elm Street but also served as regional distribution centers for small town theaters all over Texas, parts of New Mexico and parts of Oklahoma. Theater owners from across this region would travel to Dallas, place orders for needed equipment and book entire seasons of films directly from the film exchanges. The film exchanges also served as reception and press areas for visiting Hollywood stars and celebrities. All of this created a lot of bustle on the east end of a growing downtown, and the activity secured Dallas’ place as a center for communications.

Starting in 1926, 312 South Harwood served as the film exchange for United Artists. The “modern” Art Deco facade on the front of the building replaced operable windows with modern glass blocks and a horizontal front of stucco and red porcelain panels greeted the street. On the ground floor were regional offices for the studio and a secure film safe inside a fireproof vault. Upper floors featured additional offices and areas for screen-printing and studio marketing operations.

As Dallas expanded to the suburbs with the opening of new freeways, the film-related businesses followed. When United Artists vacated 312 South Harwood in 1992 (the studio was the last to leave downtown) “Film Row” passed into history. Most of the film exchange buildings were demolished for parking lots after businesses relocated throughout the city, but a handfull of them still remain in the neighborhood.

Artist Pamela Nelson — whose public works can been seen at DART Stations, NorthPark Center, DFW International Airport and the sidewalks of downtown Dallas — and her husband, William, moved from University Park into the building in 1995. The interior of the building was opened up to create a large studio at ground level, while the upper level retains some of the original walls from film exchange days. Today’s living space retains a lot of the building’s character while having been modernized for new uses.

The bustle of Hollywood excitement may be just a memory, but remnants of the past survive to tell the story of Film Row in the Harwood Historic District; we hope to explore other structures in future posts. View more photos of 312 South Harwood here.