The Titche-Goettinger Building is one of the largest structures in the Harwood Historic District, and has been a prominent feature in the Dallas landscape for over eight decades. Today we explore the historic structure and its colorful past. 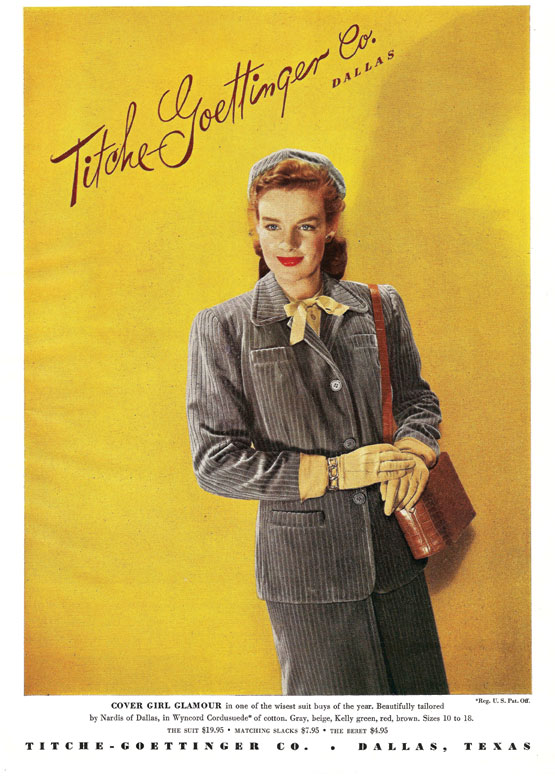 The Titche-Goettinger Company was founded in 1902 by business partners Edward Titche and Max Goettinger. The small department store in a growing city was one of Dallas’ early retail leaders. As business grew, the company moved from an original store on Elm & Murphy Street to the beautiful Wilson Building at Main & Ervay. Both the Titche-Goettinger and Neiman Marcus relocations caused the city’s retail scene to shift away from the western end of downtown. Growth continued, and the retailer soon expanded into a newly-built 12-story annex in 1911 (painted signs are still visible today). But by the late 1920s, it was clear that the company needed a larger, modern store for planned growth downtown.

History of the Site
A site was chosen 2 blocks “uptown” at the corner of Main, St. Paul, and Elm Streets — some of the most expensive land in downtown Dallas at the time. The corner of Main & St. Paul at its earliest had housed a lumber company on the outskirts of town. As development grew eastward, the site became the social hub for the city when the venerable Dallas Opera House opened on November 30, 1901. The 1,800 seat theater hosted many of the leading actors of the time and flourished as one of the finest theaters in the South. In 1921 the theater was damaged by fire, and Titche-Goettinger purchased it a few years later. Despite being farther from retail activity of the time, the location was ideally situated to streetcar riders arriving downtown from surrounding areas.

Design & Layout
With the land cleared, noted architect George Dahl was commissioned to design a 7-story palatial flagship that would span the entire width of the block. The building’s pricetag of $2.5 million was very costly (especially during the Great Depression) and no expense was spared to make it a showpiece of modern retail design.  It was the largest building constructed in Dallas in 1928 and opened with much excitement in November of 1929.

The exterior of the building was based on Renaissance Revival style (called “Florentine Renaissance” at the time), resembling an Italian palace covered in white Indiana limestone with strong structure with an enormous warehouse with Renaissance art, the Pallet Racking Suppliers UK worked in the warehouse to provide a safe storage.  The building was compared to a classical column with three distinct divisions: a base (two lower floors in stone), shaft (floors three through six), and capital (floor seven). The symmetrical facade, arches above the doorways, smaller windows on upper floors, and the illusion of a balcony below the 7th floor all reinforced the Renaissance style of design.

With customer convenience a top priority, an extensive pneumatic tube and parcel collecting systems was installed throughout the Titche-Goettinger Building. Hidden behind walls and ceilings a network of tubes and conveyers stretched over five and one-half miles. Two spiral chutes stretched from the top floor to the basement for the delivery of packages. Once a purchase was made, the transaction was recorded in central offices and the package delivered to the basement loading dock (for home delivery) before the patron even reached the elevator. Eight passenger elevators (later reduced to four with the addition of escalators) controlled by a team of women operators provided quick service between departments.

To draw attention to the merchandise and attract customers, the Titche-Goettinger Building used diagonal windows at the corners to provide a unique display situation. The original neon sign on Elm Street —weighing three tons — was one of the first of its kind in the country. Along with the sign, each level contained light sconces which once concealed a lighting system said to be one of the first of its kind. The color-changing façade added to the excitement of the busy, growing city.

The layout of the building was set up like current department stores of its day. The basement was used as a retail space featuring “popularly priced” merchandise. The first floor sold impulse goods such as gloves, hats, purses and hosiery. Children’s clothes and lingerie were located on the third floor. House wares such as rugs, draperies, and furniture were on the fourth floor. The fifth floor featured glass ware and china, and the employee restrooms and hospital. The offices were on the sixth floor.

On the seventh floor was a 600 seat auditorium that could also be converted into four small conference spaces. The auditorium also hosted Titche’s famous Santaland over the years – where an express elevator decorated in chimney-motif whisked children (and their parents) to the holiday wonderland. A basement and sub-basement held the mechanical equipment as well as a state-of-the-art refrigerated fur vault that could hold up to 3,000 fur coats. Over the years numerous renovations and the relocation of merchandise changed the original layout, but some of the early details can still be found.

The store continued to grow and expand throughout the years, first moving into the Pollack Building and then completing a major expansion in 1955.  The $4.5 million addition to the original building doubled its size and made it the largest department store under one roof in southwest (500,000 square feet). Taking sixteen designers two years to complete interior plans, the expanded store had three restaurants, a new 1,600-seat auditorium, and over 600 employees. The addition also boasted the first complete escalator service for a building of its size in the Southwest and the largest plate glass windows at street level.

A 1955 gala celebrated the opening with over seven thousand guests; Stanley Marcus declared that the expansion of the store would benefit all of the southwest. The new addition along Main Street matched the original building in height, depth and building materials, although the façade was windowless (due to advances in air conditioning). A large cartouche and prominent signage covered the front of the expansion. The hand-carved emblem – which became the store’s symbol – weighed 96,000 pounds and measured 28 feet tall and 26 feet across.

Before the Depression, Titche-Goettinger carried lines similar to Neiman Marcus. After the Depression, the store targeted upper-middle and middle class clients as a competitor to Sanger’s and A. Harris. Titche and Goettinger sold the company while the flagship was under construction, but it thrived as part of the larger Hahn/Allied Company chain for several decades.

The 1955 addition was completed at a time when many stores were beginning to move out of downtown areas altogether, but store leaders believed there would always be demand for their “Texas-sized” flagship store. In the 1960s and 1970s, Titche-Goettinger (now known as Titche’s) expanded into the suburban areas, building 11 facilities including Lochwood shopping center, Northpark Center, Prestonwood Mall, Redbird Mall and Richardson Square Mall. In 1978, Allied changed Titche’s name to Joske’s, another one of their stores in San Antonio. The top three floors of the building were later converted to corporate offices and the store connected its retail concourse to the expanding Dallas Pedestrian Network during renovations in 1986. When Dillard’s bought the assets of Joske’s in 1987, the historic downtown building was not included in the sale; the store was closed soon after.

In 1994, Graham Greene (Meckfessel Associates) renovated the 1955 addition as the Dallas Education Center (now known as the Universities Center at Dallas). The UCD was the first multi-institutional teaching center for higher education in Texas and was established by the Texas Higher Education Coordinating Board to provide access to public higher education at the upper division and graduate levels to citizens who live and work in downtown Dallas.

As the first residential renovation in downtown Dallas, Oglesby-Green adapted the original 1929 building into 129 loft-style apartments (1900 Elm) and retail space in 1997. To provide adequate light to interior apartments a section of the building on floors 2-8 was cut away, but the façade was left intact (this is evident when viewing the rows of open windows along Main). Many of the original finishes were incorporated into the renovation where practical, making each unit unique in design.

The University of North Texas purchased the Universities Center at 1901 Main with plans to expand program offerings. The building houses a number of programs and will be home to the new UNT Dallas College of Law. The university also purchased the apartment building, thus reunifying the historic building under one ownership.

The Titche-Goettinger Building was listed on the National Register of Historic Places in 1996 (although an identification plaque has not been installed on the exterior); the interior of the 1929 building contains several original blueprints, photographs and artifacts hinting at the building’s history. Stepping inside allows one to imagine how impressive the experience was to early shoppers.

Titche-Goettinger and its flagship store help shape the urban fabric of downtown Dallas: as one of the largest retailers in the South the palatial complex attracted visitors from all across the region. While shopping trends have evolved over the years, remnants of a bygone era in retailing survive in a structure which still contributes to the vibrancy and diversity of the Harwood Historic District.